Behind the Lenses: Paul Luke Reflects on how 9/11 Changed the Way FEMA Documents Disasters

— Paul Luke, FEMA Broadcast Operations Manager who was a videographer for the response and recovery efforts following the attacks.

FEMA Broadcast Operations Manager Paul Luke had been working in broadcast television for 25 years when the terrorist attacks of September 11 changed the nation- and his life.

At the time, Luke was working as a senior photographer for the NBC affiliate in Memphis. In the days following the attacks, he recorded local reaction stories and travel issues at the Memphis airport.  He was then sent to the Pentagon to document teams that were responding there.

It was 9/11, Luke says, that led him to start looking for other opportunities that combined his media and emergency management background. In December of 2001, he was hired to operate FEMA’s TV studio and to travel to various disasters to document FEMA’s activities. Just three days after being hired, he was assigned to photograph and shoot video showing FEMA’s response and recovery efforts at ground zero. When new areas were uncovered, he would travel to New York to document the efforts.

“Each time I would go up and photograph the rescue workers and the engineers going through new areas,” said Luke. “This went on throughout the recovery process, so literally my first 5 months with the agency was going back and forth to New York to record these events and make these visuals available to the national news media.”

The site was off limits to the news media, so FEMA photographers and videographers were the only people able to record what was happening. Luke says that up until that point in its history, FEMA external affairs efforts had primarily focused on press releases.

“It professionalized us in a lot of ways, as far as our ability to interact with the news media from a visual perspective,” Luke said. “It was such a visual event, especially in the early days- the visuals were everything.”

When the site was closed during the clean-up, broadcast networks relied on FEMA footage to show behind the scenes activity of what was going on. Luke made a compilation reel of all of the footage that had been captured by all the early photographers. It consisted of footage from day 3 all the way to the closing of the site. The 60-minute reel compiled all different aspects of the recovery process, it highlighted the efforts of Search and Rescue dogs and other activities. 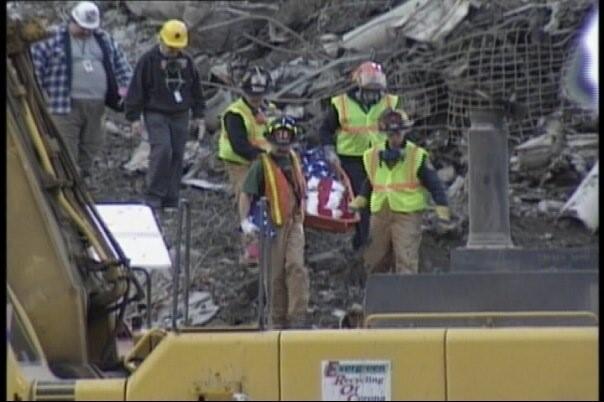 “It transformed the way that FEMA documented and showcased what we do,” Said Luke. “I think it was the first real opportunity for FEMA to show what we do on a physical basis. It showed FEMA in the true light of what its function is from a response and recovery aspect.”

Luke says there were two moments in particular that stand out to him. One moment was after they had excavated most of the buildings and gotten down into an area below ground that they called the “bathtub.” When the garage caved in, the walls had no support. The Hudson river was pushing the walls in, the pressure from the river was starting to seep water into the “bathtub.” Luke was amazed by the large engineering effort it took to hold up the walls, so that hundreds of workers weren’t killed.

Another moment he remembers vividly was when he was recording some of the response efforts six months into the recovery.

“I was standing in what was left of Tower two,” he said. “I looked across and there was a group of guys huddled together by what was left of Tower 1. When you see a lot of guys in a circle you knew that they had found something. I couldn’t really tell what they were doing but when I got back that night and I looked at my video, I could see that they were performing last rights. Six months after the event and they were still treating every recovery with dignity and respect. It was very humbling to witness that.”

Twenty years later, Luke has covered over 2,500 disasters, witnessing FEMA’s response efforts to some of the biggest moments in the country’s recent history, from 9/11 to Hurricane Katrina.

“I’ve seen a lot of the major events that shaped what the agency has become over its existence,” he said. His time covering 9/11 though, was a particularly impactful moment in his career.

“It was kind of surreal being there, being literally that close to the front line of history,” he said. “Going to ground zero and experiencing everything that went on there was impactful. To be in the center of everything and to be a part of that, I would consider that to be the highlight of my career.”