This page highlights how a Staffing For Adequate Fire & Emergency Response (SAFER) Grant was used to hire new firefighters at the Cedar Hill Fire Department. This page is intended for fire departments and nonaffiliated Emergency Medical Service organizations (EMS).

"If we had a crew out helping on a call and during that time another call came in, we were out of luck and couldn't respond as fast as we would want to," said Steve Pollock, fire chief for Cedar Hill Fire Department. "Sometimes responding to the initial call could take up to an hour and in that time, several other calls could come in."

To better serve the community and to come closer to compliance with National Fire Protection Association 1710, the Cedar Hill Fire Department applied and was awarded a Staffing for Adequate Fire and Emergency Response grant for $1.26 million, which in turn was used to hire 12 new firefighters. 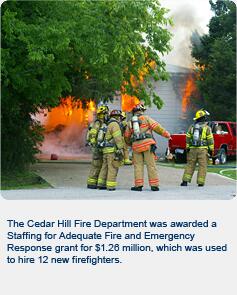 Pollock said the department's goal is to get 15 to 17 people on the ground within 8 minutes for a structure fire. All firefighters in the department are also paramedics. By the end of January, all the new firefighters will meet the minimum level of certification needed.

"The new firefighters have made a difference in response time and aiding the community," Pollock said. "They have also boosted morale because the whole team knows they can better respond to the needs of the people we serve."

Cedar Hill Fire Department recently opened a fourth station, and with the help of the grant, was able to have enough people to fully staff the engines. 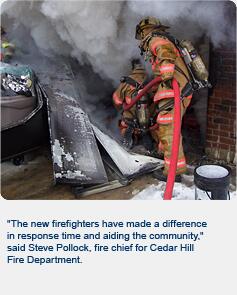 "The city wouldn't have been able to pay for enough people to cover the new station," Pollock said. "We were able to open the station thanks to the proper amount of firefighters."

The four stations provide fire service and medical care to people living in a 36-square mile area. There are 78 fire personnel and the department responds to more than 5,000 alarms annually.

That's a long way from where the department started in 1941 with 11 volunteer members.

"We have come a long way," Pollock said. "And we hope to keep growing."

Cedar Hill is in the southwest corner of Dallas County, just outside the city of Dallas.

What They Bought With The Grant: