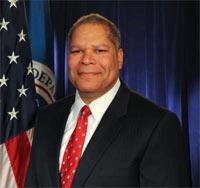 Mr. Damon Penn currently serves as the Assistant Administrator of the Response Directorate.  In this role, Mr. Penn leads an organization that provides the core, coordinated Federal operational response capability needed to save and sustain lives, minimize suffering, and protect property in a timely and effective manner in communities that become overwhelmed by natural disasters, acts of terrorism, or other emergencies.  Response program activities encompass the coordination of Federal emergency management response operations and planning.

Prior to Mr. Penn’s role in Response, he served as the Assistant Administrator of National Continuity Programs (NCP), from September 2009 to August 2015, where he was responsible for ensuring the Executive Branch of government could function under all conditions. He was also responsible for refining continuity at all levels of government.  Mr. Penn also deployed to Haiti as the DHS task force leader for assistance to the survivors of the 2010 Earthquake and served as FEMA’s Deputy Director of Disaster Operations for Hurricane Sandy in 2011.  He joined NCP after retiring from the U.S. Army as a Colonel.  His 30 year military career included senior staff positions, leadership of an advisory team in Iraq, and brigade and battalion commands.

Mr. Penn’s association with FEMA began in 2004 when he served as the Defense Coordinating Officer (DCO) for Florida.  There he was part of the FEMA emergency response team, responsible for all Department of Defense assets, providing millions of pounds of relief supplies and other forms of support to assist the Florida emergency management effort.  He also served as the DCO the following year in support of Mississippi’s efforts during Hurricane Katrina.

Prior to joining NCP, Mr. Penn spent more than two years as the Director of Operations for the Joint Force Headquarters (JFHQ), National Capital Region and the United States.  While leading the JFHQ, Mr. Penn oversaw intelligence, operations, force protection/anti-terrorism, planning, operations center, training, ceremonies, and security for the largest and most influential directorate in the command.  Mr. Penn worked directly with local, state, and federal partners to reinforce the DoD’s role as a supporter of the lead federal agency during a crisis.  During his time at the JFHQ, Mr. Penn directed numerous national security events, including the 2009 Presidential Inauguration, two State of the Union addresses, and official visits from Queen Elizabeth and Pope Benedict XVI.

Mr. Penn studied at the U.S. Navy War College, earning a Master of Arts in National Security and Strategic Studies in 2003.  He also earned a Master of Science in Administration from Central Michigan University in 1993 and a Bachelor of Science degree in Criminal Justice from the University of North Carolina, Charlotte in 1981.